You are here: Home / Archives for Fix washing machine 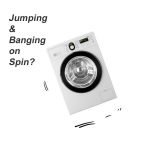 The most common cause of when a washing machine jumps and bangs on spin is an uneven load. Occasional jumping around may not be anything to worry about if it isn’t banging too much. However, regular or severe banging on the sides should be a cause for concern and can cause expensive damage to your 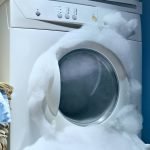 Many people are having issues with new washing machines that refuse to spin just one item, or maybe just a few items. Sometimes it may have been a reasonably sized load in their old washing machine but they’ve now bought one with a large capacity drum so the load is still relatively small. They are

I received an email this morning thanking me for my advice regarding noisy washing machines after they found a solution when their washing machine was making a metallic scraping noise. Although there are different possible causes of a scraping noise, one of the most common is the humble underwire from a bra – Just wanted

If your washing machine has a black jelly-like substance growing in the soap dispenser it is likely to be a fungal, bacterial growth called biofilm. Apart from looking nasty, it can block up the little holes in the top of many soap dispensers causing water flow to be restricted. Partially blocked up nozzles can also