Water can leak out of a washing machine’s soap dispenser drawer – in some cases quite badly. There are several different possible causes of such a leak. So the first thing to do is take note of exactly what the washer is doing when water leaks out, (and at what point of the cycle) in order to help pinpoint the cause.

The main thing to observe is – when it leaks is it taking water in or not? For example, does it leak straight away as soon as the wash cycle starts? Does it only leak when filling on the rinse cycle? Is it leaking during wash when it is not taking in water – or is it leaking only when it goes into spin?

Only leaks when filling Make sure the washer is level. If it’s leaning forward it can make it easier for water to run to the front and spill out. Try turning the tap on the washer down. Only suspect this if you know the water pressure is high and it looks like it’s gushing in quite fast on fill.

If there is an optional detergent flap fitted in the drawer for holding liquid detergent make sure it is removed, or drawn into the up position if using powder, otherwise it prevents detergent running down into the drum.

A build up of grease and black slime in the nozzles at the top of the dispenser where the water runs in can cause water to spray to the front and run out of the soap dispenser when filling. Check this article – black jelly-like substance in soap dispenser and on soap drawer (In extreme cases I’ve had to replace the dispenser.)

Leaks on wash or rinses Blocked dispenser hose: Some washing machines can flood water out of the soap dispenser if the hose leading out of the dispenser into the tub gets blocked. Blockages can be something put into the drawer by a child or a chunk of undissolved detergent tablet. Indesit, and Candy, as well as some of the later Hoover washing machines suffered from this design flaw.

The hose where the water is flushed down, was right at the front of the soap dispenser on these washing machines and it wasn’t wide enough. Undissolved powder from a tablet or lumps of detergent through poor water pressure can block this hose solid causing water to back up. Unplug machine, remove lid and feel this hose carefully for obstructions. Overfilling: If the washer starts washing but the water doesn’t stop coming in it will eventually fill the drum so much it will start to pour out of the soap drawer and other places.

If this is the fault you should be able to see the drum is so full of water it’s making a different sound, maybe labouring under the load, and the door glass full to the top with water.

You should also hear that water is still running into the machine and be able to detect it by opening the drawer. However, in most cases an over filling washing machine should trigger an error code long before it gets to this stage but if you suspect overfilling check this page – Washing machine overfills

Water can be forced out of the soap dispenser drawer. This fault should be relatively rare these days, but if you observe this behaviour call an engineer to diagnose the cause. Leaks from drawer only when spinning

If it only comes out on spin it can be caused by a partial blockage preventing the water being pumped out fast enough resulting in excess water being thrown around on spin and backing up into the dispenser.

This fault is similar to the surging fault described earlier, but different in that the problem only occurs when it’s on a proper spin cycle and much of the water has been pumped away.

Troubleshooting this fault is all about finding out why it isn’t emptying the water properly which is usually due to a partial blockage. Follow the same troubleshooting as described for a washer not pumping any water out at all – Washing machine won’t empty water

If water is being forced out of the drawer when the washer is spinning but it is on wash or rinse and shouldn’t be spinning follow the procedure for surging above. 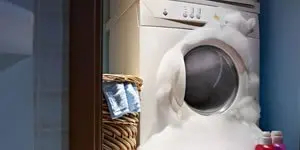 Too many suds? If you can see the door glass is white with foam up to the top it could be foaming out of the dispenser. Too much foam in the washing machine