If your washing machine is noisy and you want find out why then this article will help. It contains all possible explanations for excessive noise, by an engineer with over 40 years experience.

If your washing machine is noisy do not ignore it

It's very tempting to ignore noises while the washing machine is still otherwise working. Some can be ignored as they will not develop into serious faults.

But others, if left, will cause extensive damage and can end up costing considerably more than if tackled early. Some noises can be fixed, but if left will result in a complete writing off of the washing machine. If you aren’t an engineer you may not be able to tell which of the categories a noise falls into – so ignore noises at your own risk.

One of the most common causes of a noisy washing machine on spin is worn drum bearings. The first thing any engineer would do when troubleshooting a noise is open the door and spin the drum hard by hand. If it makes the noise when spun by hand the main suspect would be drum bearings but to truly check this you need to take off the drive belt and spin the drum by hand because otherwise you are spinning the motor too.

If the drum rumbles when spun then the bearings have probably gone. There should be a constant rumble all the time the drum is revolving – what do noisy drum bearings sound like?

I wouldn't tackle replacing washing machine drum bearings as a DIY job these days unless a seasoned and determined DIYer. It's a big job. For many years now most washing machines have plastic outer tub with the bearings recessed into them requiring special extraction tools.

Forbes specialise in renting Bosch appliances so they know them inside out. They also rent other brands and many other products. No more repair bills – more details

Sadly, in recent years most washing machines have started to be produced with completely sealed outer drums and are not repairable. Some current washing machines even have sealed casings where only the lid comes off meaning a very heavy tub has to come out through the lid. If you want to have a bash, or maybe have an older washer with more easily replaceable bearings you may be interested in this link to buy drum bearings – Buy drum bearings.

Another drum bearing failure symptom is excessive up and down play in the drum, which can be checked for by lifting the drum up from inside. Take hold of the drum at the top lip (behind the door seal). Normally this should not have any play in it if you try to lift it up, or may just only move a fraction, (don’t mistake movement of the entire tub which is on springs for play).

If you can lift the drum up and it drops back down there is excessive play then the bearings and or drum shaft are probably worn. If this is the case the play should be present all around the drum, if you can only feel the drum move at one specific point there could be a cracked or broken drum spider (see below).

A further symptom of failed drum bearings can be a brown rust patch underneath the washing machine and down the back of the outer drum underneath the drum pulley (where the belt goes) – although this patch is not always present. 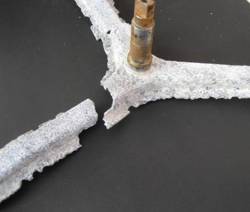 There are usually two small holes at the back of the drum bearings where water that has got past the drum bearing seal trickles out, and it's usually stained with grease and rust if water has got into the bearings. Also bear in mind many washing machines now have a base plate fitted underneath so take off the back panel and check the inside of the base plate if one is fitted.

Loud noises when turning the drum by hand can also be caused if the drum itself splits, or the spider at the back of the drum has come away from the drum, is corroded, or one of the three arms has broken. This would normally cause a loud noise on each revolution of the drum whereas the noise when drum bearings have gone is constant all the time the drum is turning.

However, a cracked drum spider may only cause noise on fast spin or with a heavy load in the drum when it catches on the inside of the outer drum. So lifting the drum and checking for excessive play but turning it all the way around and checking in different spots can often reveal a broken or loose drum spider, which sometimes only occurs at certain points round the drum (the spider has three arms and is bolted to the drum at three points). The photo to the left shows an extreme case of a drum spider which is severely corroded and broken.

Coins or other obstructions trapped between the outer tub and inner drum can make horrendous noises as they get tossed about on spin. They usually don't make the noise unless laundry is in though. If you suspect a coin or other object is being thrown around inside on spin this is very serious because as most washing machines now have just plastic tubs the object can punch through it and completely ruin the machine.

Look out for obvious dents and creases in the drum itself as evidence of a coin or similar stuck inside although be aware that it only shows there's been an obstruction in at some point and the coin could have fallen into the sump hose or filter and not actually be the cause of the noise at this time. You may be able to hear a coin or other obstruction if you drain the machine and tip it back and forth or side to side. Objects can slide about and you can detect their presence. It may be possible to manipulate the object to fall into the hole in the bottom of the tub into the sump hose where it can be easily retrieved.

Other obstructions such as buttons, smaller plastic objects, hair grips and underwires from bras can also get into the washer and cause noise, usually when the washing machine is emptying the water.

If the noise only occurs when the washing machine is draining the water check the pump filter and pump for obstructions.

(Troubleshooting washing machine pumps and cleaning the filter). The pump itself can become noisy if bearings fail but it’s far less common than something stuck inside it.

Noise only when washing

Noises from re-circulation pump: Some washing machines have a separate pump that pumps the wash water around and back into the drum during wash.

If you get a strange noise whilst on wash which isn’t present on rinses it could be coming from a re circulation pump that’s got worn bearings or something inside it. A clue that this might be the case is if the noise is continuous even when the drum stops revolving. If the noise only occurs as the drum is turning it will be related to the drum or motor.

A light scraping or ratchety noise when the drum is turned by hand is commonly a bra wire trapped between the tub and drum. They can often be removed from underneath with the sump hose taken off. It’s always worth checking that the wire isn’t poking through one of the holes in the drum which can be pulled back out from inside the door. It’s rare, but I’ve retrieved 3 or 4 this way over the years. Otherwise it can be tricky to remove one.

I’ve also got many out through the sump hose, or by removing the dispenser hose and slowly turning the drum. If lucky, the trapped under wire may come within reach. If not a full strip down may be needed. It may be best to leave it in as they aren’t strong enough to normally do much damage but they could rip clothing, and eventually cause a pump blockage if it works its way eventually over to the pump (how to remove something stuck in washing machine

in Part two which explores the following noises –