Washing machine outer drums (or tubs) used to be made of metal, or even stainless steel. Almost all washing machine manufacturers have long since changed over to cheaper plastic. Now they can no longer rust, but there is a big disadvantage. Coins or other obstructions (which are extremely common obstructions inside washers) can now easily crack or destroy the drum.

I’ve seen many cases of coins being punched right through during spin. They break off a big chunk of plastic causing a large hole, and a flood. There’s nothing much can be done for it then. However, if you just end up with a hairline crack you can sometimes repair a plastic outer drum.

Can You Repair a Cracked Drum?

In the case of a hairline crack in a drum I’ve successfully repaired many of them with a soldering iron. You have to be careful not to put too much pressure on though. The point on a standard soldering iron is pretty small.

So if you aren’t careful you can potentially go through a drum with a hot soldering iron like a knife through butter. Get the soldering iron nice and hot, then gently go over the crack to melt the surrounding plastic and seal it up. I try to bring some of the plastic from each side of the crack over to melt into the crack. It may be necessary to unplug the iron if you can’t get close enough. In which case you may need to keep plugging it back in to keep it hot enough as you go along.

Be careful – although you could argue it’s kill or cure anyway. To do it properly the crack should be sealed from inside and out. I can understand most people wouldn’t want to strip one down though, which is far more involved. In fact many can’t be stripped down now anyway by design. If you have already stripped it down to investigate the leak before discovering the crack then that’s an opportunity to seal it on the inside too.

You must find the cause of the crack

Remember, if there is a crack in the outer drum it is likely to have been caused by a coin or other obstruction. Obstructions get inside the machine through things being left inside pockets. If you have a cracked drum you need to find the obstruction before even thinking of a repair. Check in the sump hose and pump filter. Also lean the machine over from side to side and front to back.

After sealing up a crack I’ve usually added a skin of sealant to really shore up the repair. Washing machine engineers use a special flexible and heat resistant sealant called Debor washing machine sealant (as used by the trade). Rough up the surroundings with sandpaper and apply a large patch.

Repairing a hole in the drum

If there is a hole in the drum then clearly something different needs to be tried. It’s probably best to write the machine off unless it’s a very small hole. This forum article shows a few useful tips – Repair Hole In Washing Machine Outer Drum 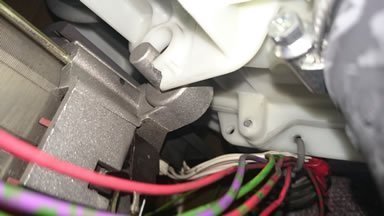 A comment added below has asked about repairing an outer drum where one of the plastic motor brackets has broken.

This has caused the motor coming loose and throwing off the drive belt. If you look at the photo he supplied it looks like a very difficult repair to carry out successfully.

My first concern is how has this actually broken off? It’s not something that should really happen. Maybe there was a flaw in the mould somewhere? Anyway, the missing piece is still available. So the first option that springs to mind is to try and stick it back on. However, I’m not sure there is any adhesive available that is strong enough for the job. It would certainly need to be very strong because during spin the motor is constantly trying to move.

Also there will be quite heavy forces at work during spin when the outer drum is bouncing around from side to side. As the motor is attached to the bottom of the outer drum you can imagine quite a lot of force will be trying to break the motor free. My understanding is that Richard is going to attempt to repair (see update below). If the plastic part that has broken away cannot be stuck back on, or cannot be found then it would be very difficult to try and put something else in place to do the job.

It may be possible if someone could come up with an ingenious method. I have little confidence that it can be repaired though. The only other option is to replace the entire outer drum at great expense. Some older outer drums may come in two separate halves, but even so it is still a very big job.

Regarding the repair attempt to the motor broken bracket mentioned above. Richard informed me that he found some extra strong epoxy resin supposedly as strong as metal. After sticking the broken plastic bracket back it unfortunately came off again after one successful wash. He concluded it wasn’t possible to repair it. It was worth a try, but as I suspected, the forces of the motor movement during spin are always likely to undermine a repair.

If there is a hairline crack in the outer drum (tub) there is a good chance it can be repaired using my advice above. If a piece of the drum has been punched out though, a repair is much more difficult and risky. With a hairline crack you get a leak. With a chunk punched out you get a flood. So if you attempt to stick a piece of the drum back on and it fails – the washing machine will flood the kitchen. This could potentially happen a long time after the repair.

You would need to make sure you’ve done a solid repair, and done more than just stick the part back in place. If I was attempting such a repair (I never did) I would want to stick the piece back in place with epoxy resin, then seal it over with something else, and then try to stick something like a large patch over it all. However, due to the risks of a flood if the piece ever came out I would never attempt such a repair for a customer.