If your washing machine won’t drain the water out this article gives advice on how to fix it. Has the washing machine only just been plumbed in and it won’t empty? Then you might not even need to drain or pull the washer out – so read this first won’t drain after being moved or plumbed in.

If your washing machine is stuck full of water because it’s gone dead, just make sure that it isn’t something simple like the fuse or a problem with the wall socket. This could save a lot of messing about trying to drain the washing machine.

Otherwise you need to drain out as much of the water as possible before doing anything else. Read this article how to manually drain out the water that’s stuck inside washing machine and return here when you have drained out the water.

What are the main causes of not draining?

Once you’ve drained out as much water as you can it’s time to investigate further. If the washer appears to be functioning normally, but won’t pump away the water, these are the most common causes –

There are 2 variations of this fault. One is when the washing machine is left completely full of water and not one drop has been pumped away. The other is when only some of the water gets pumped away. The latter can be caused by an intermittent fault, or more commonly by a partial blockage somewhere. However, bear in mind that if another fault prevents the washing machine doing a fast spin, that might account for some of the water left in the drum if it’s not too much.

Is the water pump running – or not?

Note that some washing machines like Hotpoint Whirlpool and maybe Indesit turn off the pump when there’s no water inside so if you are only testing it without water that could be why it isn’t running.

If the pump isn’t running

The most common reason a pump isn’t running is because an obstruction is physically jammed inside it. Check that the impeller turns and it’s not jammed (or broken and loose on the shaft). It may have a little magnetic resistance at one point but it should be at the same point on each revolution.

The impeller should turn fairly easily. It might be possible to hear a gentle hum in place of the normal pump sound when it’s trying to drain, although not necessarily. A hum would indicate the pump is electrically OK and is trying to run but is jammed.

If the pump is not running but not blocked or jammed then it needs testing with a continuity test meter for open circuit resistance across the pump’s terminals. An open circuit pump is clearly faulty and needs replacing.

The windings on a standard washing machine pump would normally have a resistance of around 165 Ohms. If it isn’t open circuit or jammed you’d need to investigate if it is getting power and has a neutral return. These are things an engineer should be doing – Find white goods appliance repairs

Is the pump making a loud grinding noise?

If the pump is making a loud grinding noise, either constantly or intermittently, there is likely to be something inside being tossed around by the impeller. It’s possible for a pump to have bearing failure, but in most cases it will be an obstruction (such as a coin, hair band, hair grip, bra wire etc.) stuck inside the pump. With the water drained out and pump filter removed it should be possible to see into the pump (where the impeller is) to check for obstructions. 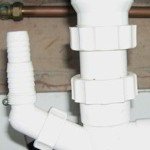 Is the drain hose connected to the u-bend under the sink? If so try checking the spigot for blockages. Note that if you cannot hear the pump running don’t bother. A blockage here would not stop the pump running, nor would it make the pump stop making its normal noise.

This is a simple fix, and can be done without moving the washing machine. The drain hose is connected to the u-bend by a plastic spigot pushed into the end of the drain hose. Unscrew the spigot to inspect inside. Also check inside the u-bend where the spigot screws on. A small button, or accumulated bits of stringy threads and lint from laundry can get stuck here. It takes surprisingly little to stop the water being pumped away at this point.

Check for a blocked pump filter

Taking the filter out

It should be easy to pull the filter out. If unsure check your instruction manual or the pump filter link above.

If the filter appears jammed and won’t come out read the advice in the pump filter article. Don’t make the mistake of assuming that anything found in the filter will account for the fault. The pump filter would need to be physically blocked by something like a sock, or a buildup of lint to stop the washing machine from pumping out.

If all you find is a few buttons and coins this will not be the reason your washing machine isn’t pumping the water. Only an object actually jamming the pump impeller or a substantial blockage of the filter would account for not draining.

If you can’t find a blockage

If there are no blockages substantial enough to account for the problem there could still be a blockage – but in less accessible places. It’s probably better to consider finding an appliance engineer. A more obscure blockage could be inside the drum, the sump hose, the pump chamber, or even inside the drain hose. This type of blockage would normally also stop water being drained out manually.

So if water drained out easily through the drain hose or filter hose it implies there is no physical blockage. Remember you should only be looking for a blockage if you can hear that the pump is running. If the pump is not running we aren’t suspecting a blockage. If it’s running, not emptying, and there’s no blockage in the pump, filter or u-bend read here – Can’t Find a Blockage But Washing Machine Still Not Draining