The principles of diagnosing carbon brush faults, and deciding if they need replacing are exactly the same as for any motor with carbon brushes fitted across all brands.

How do I know if I need to fit new carbon brushes?

I often see where people have fitted new brushes and the motor still doesn’t work. Don’t fit them speculatively. It’s common for people to see that brushes are worn, and probably need replacing – but this doesn’t mean it will get your motor running again.

If a motor stops running, it can also be caused by many other faults. So unless you know the brushes need replacing don’t waste your time and money.

If you observe lots of sparking from inside the motor then this may also a symptom. However, very small sparks are usually normal and not necessarily a fault.

You should be competent enough to be able to diagnose and repair this type of fault because other faults could be present. You should always test a motor’s insulation with a suitable insulation test meter to ensure electrical safety using 500V DC. Low insulation on a motor could blow electronic parts inside a PCB.

Here is a picture of a pair of worn Hotpoint carbon brushes. Both carbon brushes are approximately 80% worn but the carbon brush on the left is still making good contact with the armature.

The difference between the two is that the faulty one on the right is charred and sooty at the tip. It’s taken on a charcoal-like appearance and there is evidence of burning present. The good carbon brush on the left is smooth and shiny at the tip which shows no sparking has been occurring.

Here is a picture of a pair of worn Hotpoint carbon brushes. Both carbon brushes are approximately 80% worn but the carbon brush on the left is still making good contact with the armature.

If both brushes are smooth like the one on the left, then they are still making good contact and are not likely to be causing any symptoms. However, if they are as worn down as this they clearly still need replacing. It’s just that maybe the fault you currently have is caused by something else.

This carbon brush is OK

This Hotpoint (or Creda) carbon brush is about 20% worn. The tip of the brush (that runs against the armature) is shiny and smooth, with no evidence of burning. It is therefore perfectly alright.

It is possible for a carbon brush that is not worn down significantly to stick inside the holder (which is spring loaded) If this happens, then as the brush surface wears through normal usage, the brush doesn’t get moved up and stops making contact with the armature.

If this happens, then the tip of the carbon brush will look charred like the 80% worn one above. 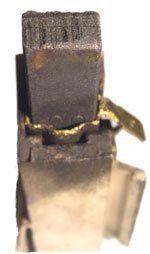 This carbon brush is approximately 50% worn but something has gone seriously wrong. If yours looks like this then there could be problems with the other parts inside the motor.

The tip of the carbon brush is charred but note the arcing damage to the brass holder which has been caused by excessive sparking and flashing inside the motor.

If the tip of the carbon brush is damaged to the extent that there is a chunk broken off, (not shown here) then there is a good chance that a raised commutator bar on the armature has caused the fault. This would require a new motor. A raised or loose comm bar can be felt by placing a finger on the copper segments and slowly turning the armature.

If the washing machine has also fused, then this is evidence of electrical shorting inside the motor which you need an insulation test meter and electrical knowledge to diagnose and repair.

Also, if there is damage like this on the brass holder (and especially if the washing machine fused) then the TOC could have blown also. This is then not a simple case of replacing the worn carbon brushes and no longer a straight forward DIY repair job.

Fitting new brushes in a motor is relatively simple. However, it can also come with complications and you may ultimately just be wasting your time if you haven’t got experience working with motors and you don’t have proper test equipment. See the extra information in related articles below but give serious consideration to getting a proper repair engineer to look at it.