If you have a washing machine that is not pumping out the water and stuck full of water – don’t start here. This is the final advice if you’ve tried all the advice on my article won’t drain water. However, if you can hear or see that the pump is running, but water still isn’t being pumped out and you can’t find a blockage – then continue with this article.

Pump has no blockages, filter is clear, and it runs but it still won't drain water

So if your situation is that no water is being pumped out, but the pump is apparently running, and you’ve checked the pump and filter for blockages and found nothing here are the possible explanations..

There is a blockage but you just haven't found it

Small objects may not be noticed. They could be underneath the impeller, wrapped round the impeller or stuck inside the pump chamber out of sight.

An elastic band or elastic from a hair bobble, a small piece of torn strap from a bra, a large piece of grit or stone, a small screw, a piece of plastic etc. items like these and other similar obstructions could all cause the impeller to slow down and not be capable of creating the vortex required to force out the water. Rubber bands and similar can wrap around the impeller restricting its movement.

Other items could get trapped underneath the impeller out of sight and also restrict its movement. In all these cases it should be detectable by trying to turn the impeller with a finger or screwdriver (with the machine unplugged of course!). It should move freely.

However, some impellers may feel like there's a small resistance which when overcome allows the impeller to jump 180 degrees round. Then another small resistance needs overcoming before it jumps round again. Without knowing how free an impeller should be it's hard to diagnose but if one is quite tight all the way round it is probably obstructed.

A button of a specific size could be small enough to get through the pump filter and even past the impeller, but then get jammed inside the pump outlet chamber where the drain hose attaches to. This would be invisible unless the drain hose is removed and you look into it.

Another common blockage here that can remain undetected is a small piece of a bra wire that got through into the pump outlet chamber and has jammed inside. Subsequently most of the fluff and threads that would normally pump away can get snagged on it and build up into a blockage.

A button of a specific size could be small enough to get past the pump and into the drain hose, but be too large to pass through the drain hose or through the plastic spout on the u-bend that the drain hose may be connected to.This could completely stop water from being pumped out, or it could even manifest as an intermittent fault.

I've seen several cases where a button is jammed halfway up inside a drain hose or in the opening of the plastic spout of the u-bend connection but it spins round and acts like a butterfly valve. When swivelled round one way water can get past, but then the water flow can swivel it round again so that it stops the water flow. To check for this you'd need to disconnect the drain hose from the u-bend and examine the end of the drain hose and inside the spout itself to check for blockages.

If necessary, the drain hose can also be taken off the machine to see if you can detect any obstruction. I've managed to clear some large obstructions by shoving the end of the drain hose onto the cold tap at the sink and turning on the water. Be careful though, you can easily end up spraying water everywhere. I use a large dishcloth over the hose and hold on tight. If there's no blockage though or it's something that's swivelled round and not closing off the flow you shouldn't feel much pressure.

The pump itself is faulty

The pump could sound like it's running but in fact it is not revolving at speed inside, however, I would expect it to sound different to normal.

It's even possible for the pump to be oscillating instead of revolving because of a fault causing it not to spin properly. You would have to use your imagination to find out if either of these are the case. It's relatively rare.

This one is likely to be rare, but worth mentioning. I’ve recently had email contact from Michael, who had a strange fault where he could find no blockages, the pump was running, and it initially pumped a little water out then stopped.

After some struggle and determined investigation he eventually discovered that one of the suspension springs on his Hotpoint Aquarius washing machine had broken (under the lid).

This had caused the main drum to drop, which squashed the sump hose (the main hose leading from the bottom of the tub to the pump) causing it to kink. When he replaced the spring, the tub was held in its proper position and released the pressure on the sump hose allowing it to pump out properly again. 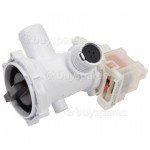