You are here: Home / Washing Machines / Get rid of washing machine smells

Does your washing machine smell bad? This is usually caused by a build up of a greasy slime and bacteria inside the drum and hoses. You need to do a regular maintenance wash cycle to prevent this. Failure to do so usually results in washing machine smells, and a shortened lifespan.

It can also put dirty marks on your laundry, make laundry smell – even after washing, and cause various breakdowns and faults on the washing machine.

How to cure a smelly washing machine 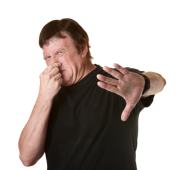 Being able to get rid of a bad washing machine smell will depend on how severe it is. If you are just starting to notice a slight unpleasant smell there is a good chance you can get rid of it. Various appliance cleaning products are available. They claim to freshen up washing machines and dishwashers leaving them free of bad odours. They can make a difference, but they can’t work miracles

This article discusses various cleaning products and methods later. It also explains what causes the problem, and how to avoid it. I’ve tested many washing machine cleaning products. They do a good job of freshening up a relatively clean washer or dishwasher. But I’ve not found them as effective at curing a seriously smelly washing machine if it is caked in grease and slime.

Smells from the plumbing

Plumbing faults can also be responsible for washing machine or dishwasher smells. Does the smell seem to come from around the washing machine rather than from inside the drum? If so, a bad smell could be coming from the plumbing. Check out this article for more details – smells caused by plumbing faults.

Should you Leave the Door Open After Washing? 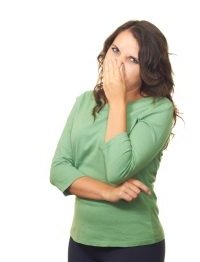 Yes. Wipe the door seal and leave the washing machine door ajar to let it all dry out.

There is strong suspicion that this problem started after detergent manufacturers removed certain elements from their detergent that were deemed harmful to the environment. I remember a lot of talk about phosphates in the early 80s. Prior to this I wasn’t aware of this issue at all despite having repaired washing machines since 1976.

Another big contributing factor is low temperature washes and liquid detergent. Most people don’t use hot washes any more. Hot water (above 60 degrees Fahrenheit) helps to kill bacteria and cut down grease. If you mostly use low temperature washes, especially in combination with liquid detergent (which contains no bleaching agents), then this is likely to ruin your washing machine. Likewise if you mostly use washing machine detergent that also doesn’t contain any bleaching agents such as colour friendly detergent.

The smell is the least of your problems

This gunge also rots hoses & door seals. It blocks the pressure system causing overfilling or spin failure. It even eats away at the aluminium based drum spiders causing one or more of the drum’s arms to disintegrate. It’s usually fatal to the washing machine.

People suffering the worst cases of this slimy grease usually use only 40 degree or 30 degree washes exclusively. Some only ever use the quick wash cycle – which is completely inadvisable. These wash cycles aren’t able to get rid of grease, slime and bacteria. 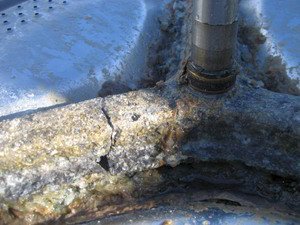 If combined with poor quality detergents, not using the recommended quantities (very important), or only using colour-friendly or liquid detergent it allows bacteria, grease and limescale to thrive. Over time this can seriously rot a washing machine inside and shorten its lifespan (see pic).

Example of grease, slime and black mould inside washing machine 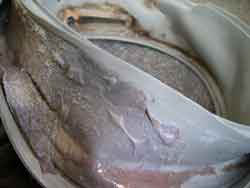 Grease and slime has built up on the underside of this door seal. It smells. This level of slime will have infested the whole washing machine inside.

The owner only used liquid detergents, and low temperature washes. This door seal has been removed, but whist still fitted most of this slime is not visible.

Examine the underside of your door seal for slime and grease. Open the door and pull it back where it fits up to the lip of the inner drum. Have a good look underneath. Is the door seal and lip of the main drum covered in grease and limescale? If so you have a problem that needs dealing with.

How to avoid a smelly washing machine

As with many problems, avoidance is by far the best policy. The best way to avoid a smelly washing machine is to use good quality, powder detergent. Also regularly use the hot washes. It’s important to use the proper quantity of detergent.

Not using enough detergent may produce acceptable wash results but at a heavy price for the washing machine inside. 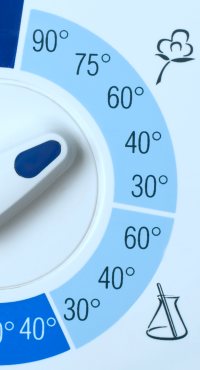 Try to wash bedding and towels at 60 degrees (if their wash labels allow it). In theory if you do this you shouldn’t have a problem with smells, grease, bacteria or limescale. If you insist on using low temperature washes and liquid detergent you should do a hot maintenance wash once a week.

Washing at 30 degrees The best detergent to use is detergent containing bleaching agents. For more details see Which is the best type of washing machine detergent?

Products to get rid of appliance smells

The last product on the list is by far the best cleaning product I’ve tested so far and suitable for all washing machines and dishwashers. I’ve tested this several times on my own washing machine and it definitely removed a lot of limescale.

White distilled vinegar has an array of uses. I’ve seen many reports from people saying that distilled white vinegar does actually work.

I haven’t tried it myself though. And also be warned, vinegar can damage rubber and plastic seals over time so I’d be cautious about using vinegar regularly.

Try putting half a cup of white (distilled) vinegar inside an empty washing machine on a boil wash cycle. The best way to do this is to wait until the washing machine has been filling for several seconds before pouring the vinegar into the soap drawer.

Don’t place it inside the drum. If you do the vinegar may run straight into the sump hose and be wasted.

Soda crystals dissolve grease. So you might also want to try to clean the washing machine inside with them. Pour half a packet inside the soap drawer whilst it’s filling with water. Using this method every month or so can help prevent smells from your washing machine. Remember it will be difficult to remove grease and slime if your washing machine is badly affected. Use it on a boil wash with no laundry inside.