Customers who report these incidents are definitely claiming it is dangerous. I have seen reports of people being cut and injured, but nothing serious so far. As far as I can make out it’s been more to do with being cut picking up the glass.

Back in 2012 there was a brief flurry of international media interest in my article. It was widely quoted and linked to. However, presumably without any reports of serious injury it was soon forgotten.

This article is about the door glass exploding. Another issue, which has also had national press coverage is when the washing machine’s inner drum “explodes” during spin.

This is a known issue related to specific brands and is covered in my article here – washing machines exploding: What’s going on? 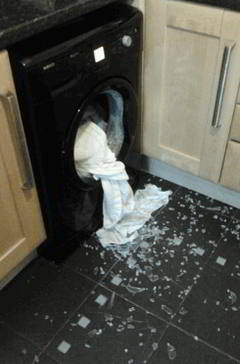 Seeing the following photo on my Facebook news-feed heightened my concerns. It’s of a friend’s small child innocently looking into their washing machine. 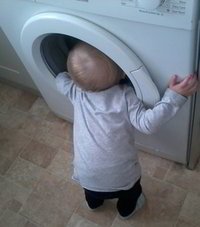 No parent could be expected to foresee the thick door glass of their washing machine shattering, either when on – or especially when it’s just standing unused. This photo is worrying when you know about all of the incidents that have happened (rare or not). Clearly it’s best to not let children get this close up just in case.

Manufacturers are saying the problem is caused by foreign obstructions such as coins or metal buckles hitting and weakening the door glass. The weakened door can then shatter under constant heating up and cooling down.

Another theory is that it’s caused by people overloading the washing machine. However, it would be nice if the door glass was strong enough to cope with such inevitable stresses. I have written an article specifically covering that subject here – exploding door glass who’s fault is it?

Until a definite cause is proved it’s difficult to know what needs to be done. The main expectation is that the door glass maybe needs to be made thicker. There’s no proof that the glass is too thin as yet. If manufacturers placed a plastic cover in front of the door glass it would definitely prevent any injuries. This would make it double-glazed.

It’s likely to be difficult to fit one retrospectively. So it would probably need to be designed like this from the off. This was actually done around 20 years back by Hoover on models like the Eco Logic, Soft Wave and New Wave. However it was done for thermal protection and insulation. To my knowledge, and in my experience, the shattering door glass was not an issue back then. I didn’t come across any shattered door glass until around 2008.

Enough reports of the glass shattering whilst the washer isn’t even on have been made to be taken seriously although this still appears to be rare.

Don’t let kids play around washing machines until this issue is hopefully resolved.

Some door glass appears to break into relatively safe rounded chunks, but some (see photos of broken glass ) have broken into more sharp and jagged pieces, which definitely look dangerous.

Remember, there are only (presumably) a few hundred cases out of millions of washing machines and only a small percentage of them claim the washer wasn’t running at the time.

So the odds of it happening at all – never mind someone being in front of it at the time – should be very low. If you are concerned enough to need to do something you could try hanging a thick towel over the door when the washer is not in use. That would prevent or limit any glass flying out. Keep children and pets away from it especially when it’s running.

Many of them aren’t built as well as they used to and can’t take much “abuse”. Don’t overload the machine by cramming it so full that the whole laundry just turns around in one big lump. Don’t under-load it either – Loading a washing machine).

Also make sure you check all pockets for coins and other obstructions before washing.

Don’t put laundry in with metal buckles or buttons which could hit the door glass.

I’ve seen two new AEG washing machines that both have a protective plastic see-through plate in front of the door glass (which is the solution I’ve always described). However, they were both washer dryers.

So it’s more to do with thermal insulation again than protecting against shattering door glass. As AEG have only had 1 reported incident on Whitegoodshelp (so far) it seems unlikely they would have introduced this “shield” for safety. It’s likely to just be coincidental. 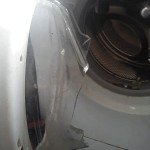 I have a separate page where I feature all of the best photos of shattered door glass. On this page there is also a list of all of the incidents reported to me in order of which brands are most affected. Photos are currently on photos and tally of broken glass.

There are also plenty of comments on this article below to read and research if you scroll down. If you have any information or would just like to register an incident with me please add a comment or contact me