What is the pressure system?

The pressure system is made up of several parts. It has a simple purpose and that is to tell the washing machine when water inside the drum has reached a specific level, and when all the water has been successfully pumped away. If something goes wrong and the washing machine does not receive these signals then the washing machine can either overfill, or refuse to spin.

Various things can go wrong causing symptoms described below – but all these symptoms have other possible causes too. So it’s important not to make assumptions. In order to try and understand pressure system faults you should read the first article to understand how the pressure system works.

They are normally very reliable, but it’s possible for a pressure switch to be faulty.

However, in my experience it is the last thing to suspect. Never fit a new one if you haven’t ruled out all other faults – especially a blockage in the pressure chamber bottle at the base of the outer drum (details later). A switch sticking on will make the washer think there’s water inside the drum when there isn’t. Conversely, sticking in the off position will tell the washer there isn’t any water in when there is. 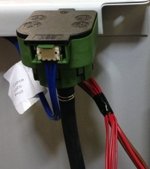 The old style pressure switch has remained virtually unchanged for 40 years or more and has usually been one of the more reliable parts on a washing machine. It remains to be seen whether these (obviously cheaper) designs are reliable or not but in theory they ought to be very reliable still (if not more so) because of the reduced number of parts. Troubleshooting these modern pressure switches may be a bit more difficult without knowing the expected resistance readings.

A blocked pressure chamber bottle can also restrict or prevent water getting into the bottle in the first place causing the washer to take in too much water or to overfill.

This would need a fairly solid blockage though and is much more rare than trapping the air pressure as described in the last paragraph. This is because the sheer volume of water inside the tub can sometimes force its way past gunge into the bottle, but because hardly any water actually goes into the bottle this very small amount cannot force its way back out when it drains (if there is a blockage).

If a pneumatic door lock is fitted that prevents the door opening when full of water, a part of the small pressure tubing (at the top of the pressure chamber bottle) branches off and fits onto the door lock. The air pressure is therefore also used to operate a lock inside the door as described in this article different types of door locks.

This type of interlock is rarely used these days because of cost cutting, but it used to be common on washing machines from the 90s. The relevance here is that gunge inside the pressure chamber bottle can also trap air in the tube that leads to the door lock preventing it from opening even when water has been pumped away.

Not taking any water in or refusing to do a fast spin are other possible symptoms of faults on the pressure system related to the machine thinking there is water inside when there isn’t – but as with most of the other symptoms, other unrelated faults can cause the exact same symptoms. General help for these two faults can be found here – not taking in water and not spinning.

Finally, a fault in the pressure system can cause the washer to abort the programme and give an error code – appliance Error codes – What You Need to Know