A blocked pressure system on a washing machine can result in various different symptoms. But it’s not something to speculatively do in the hope that it will fix a fault. The pressure system isn’t always easy to get to – and all symptoms have other potential causes too.

Remember that all of these symptoms can also be caused by various different faults unrelated to the pressure system. The first one for example could be also caused by something as simple as an unbalanced load (won’t spin just one item or very small load).

The most common symptom of a blockage in the pressure system is the first one in the list. But if it won’t kick into the fast spin there are more likely causes such as if it hasn’t drained the water out (water isn’t pumping out). It’s important to understand that a blockage in the pressure system will not stop water being pumped out. The problem is that the water has pumped away but the blockage prevents the signal that it has gone from being activated. The washing machine won’t do the fast spin if it thinks the water has failed to pump out.

Did you hear the water pumping away OK as normal? Unless sure, call an engineer

Testing for a blocked pressure system

There is a quick test that may indicate a blockage. Once all the water has been pumped away and the washing machine has refused to spin or cut out, disconnect it from the mains power. Then take off the lid. With the washing machine totally disconnected from the mains carefully twist and pull the small rubber pressure tubing away from the pressure switch. If you hear a click when the tube comes off this is the pressure switch turning off as the trapped air is released.

Now try gently blowing down the tube. Is there any resistance? If you can’t blow down the tube it is blocked. However, if there is enough water in the drum the water will cause resistance and that’s not the same thing. If it is water you will be able to hear bubbling water when you blow hard.

Remember, if you take off the pressure tubing whilst the washer is full of water you will hear a click, and will feel resistance when blowing down the tube – not because of a blockage in the pressure system – because of the presence of water.

If there is resistance, and it isn’t water, blow harder and see if you can clear the blockage. Sometimes a solid blockage can need a lot of pressure to clear through it. If you blow down and clear something so that you have a free passage of air then you have temporarily cleared it. I’ve known this method clear the fault for a several wash cycles, a few months, or even totally, but most of the time it will only clear it for a while and needs fixing properly asap. 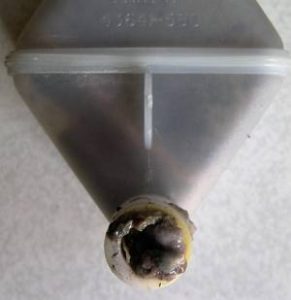 The only way to properly clear a blockage is to remove the pressure chamber bottle and thoroughly clean it under the tap. If you look at the example picture you can see the gunge is caked inside the bottle and there is no way this blockage can be permanently cleared no matter how many times you blow down the tubing.

As the part is usually located deep inside the machine attached to the main tub you will normally need to partially dismantle the machine to get to it. Don’t forget to check the hole leading into the bottle where it attaches to the drum for blockages too.

You shouldn’t be messing with washing machines unless you are experienced at repairing and maintaining things and know what you are doing around electrics. Here is some vital advice – 3 good pre repair tips | DIY Washing machine repair warnings: 8 things you should never do

What causes a blocked pressure system?

Blockages are caused by a build up of grease, bacteria and slime and or limescale. Check out how to prevent this in my article here – Causes of grease, slime and black mould inside washing machines. But if you have a blockage already it is very unlikely you will be able to clear it with maintenance washes or washing machine cleaning products. Believe me I’ve tried.