Virtually all washing machines are cold fill only now. But most homes have plumbing for both hot and cold fill hoses. So what should you do with the old hot water tap? You could always just leave it disconnected. But that’s not ideal. It could get knocked at some point and start leaking.

Blanking off the old hot tap

Best practice was to blank it off. However, when a section of plumbing stops being used – whether blanked off or not – stagnant water can build up. Under certain circumstances and in certain conditions it’s possible for stagnant water to leach into the water supply.

So the the ideal solution is to have all of the related plumbing for the old hot water tap removed. However, this is not always practical, easy, or even arguably necessary. Read on for a full understanding of the issues.

Many blanking caps are the wrong size 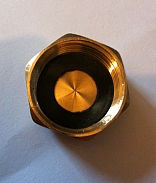 Before finding out about the stagnant water problem I decided to blank off my own hot water tap.

I found it surprisingly difficult to find the right blanking cap. I visited several major DIY stores including Wickes and B&Q trying to find one. They only seemed to stock one. It looked like what I was after, but after buying it I found it was too big. If I remember right I think it was 22 mm.

Which size do you need?

The size you need if you want to try and source one from a shop is – 3/4″ (which is around 19 mm). You could also try Amazon –Buy 3/4″ Brass blanking cap and washer

It needs to come with a rubber seal, but if you don’t get one, try using one from the old hot fill hose. Amazon currently sell several caps here Buy 3/4″ Brass blanking cap and washer.

Remove all the unused plumbing?

So this used to be a straightforward issue, but it’s been complicated by new information (to me) regarding a potential health hazard caused by, “dead legs in plumbing”.

What is a dead-leg in plumbing?

Capping off unused taps, or simply never using them again, causes water to be trapped in a dead end. As water never flows through it again the water trapped inside becomes stagnant and never gets replaced. If temperatures allow, bacteria and other micro-organisms can start growing in there creating a serious health risk. This can create contamination of the rest of the water supply if some of it breaks away and joins the rest of the flowing water.

A stagnation in a pipe line leads to massive grow of biofilm. Even a short dead leg can contaminate a whole system. Thermal and chemical disinfection will not solve the problem because it will never reach the dead leg as there is no water flow.   ”

What are the possible health hazards?

The issue with the hot water supply is potentially more serious because hot water is used in mixer or power showers, and the deadly Legionaries disease is notorious for being spread by airborne droplets if breathed in. However, my understanding is that if water is 60 ° C the bacteria cannot survive (which is possibly why public showers are always too hot these days).

How real is this issue?

This is completely new to me, and not really the remit of a repair engineer. However, I’ve spent some hours researching and there are credible sources (including government web sites) that warn against redundant pipework (dead-leg). They also link it with Legionaries disease. That said, I’ve also seen a site that claims copper pipes inhibit the build up of bacteria.

Is this a health issue waiting to hit?

So is this really a real and present danger requiring millions of homes to employ plumbers to remove all the old washing machine hot water pipework as soon as possible? All of the information I have found so far (including the quotes below) is advice aimed at people in charge of buildings (including landlords), employers and councils etc. I’ve found no advice aimed at informing us the general public.

As yet there seems to be no recognition of the fact that over the last 20 years or so almost every washing machine stopped using hot water. So millions of UK homes now have dead-leg pipework running to their washing machines.

I suspect the risk may be extremely small – especially in the UK. I’ve not heard of any health cases and dead legs are clearly very common, but it is definitely something to consider.

2.77: Consideration should be given to removing infrequently used showers and taps and where removed, the redundant supply pipework should be cut back, as close as possible, to a common supply, eg to the recirculating pipework or the pipework supplying a more frequently used upstream fitting.   ”

2.78: The risk from legionella growing in peripheral parts of the domestic water system, such as dead legs off the recirculating hot water system, may be minimised by regular use of these outlets. When outlets are not in regular use, weekly flushing of these devices for several minutes can significantly reduce the risk of legionella proliferation in the system…

…Once started, this procedure has to be sustained and logged, as lapses can result in a critical increase in legionella at the outlet. Where there are high-risk populations, eg healthcare and care homes, more frequent flushing may be required as indicated by the risk assessment.  ”

Best practice should be to have any redundant pipework removed altogether and capped off. This unfortunately means most people will need a plumber and have an unwanted expense. So it is quite likely that most people will ever bother to do it unless there is a respected source (such as government or Which?) warning about it. I suspect many plumbers are unaware of it even.

Hot and cold fill washing machines may come back

Another consideration is that you might not want to have the pipework removed in case it is ever needed again in the future. This may be unlikely being as virtually all washing machines are cold fill only and have been for many years. However, it’s not difficult to imagine a reversal of this practice and a return of the hot water valve on future washing machines.

I have personally pointed out several good reasons for reintroducing the hot water valve in my article on cold fill washing machines. It would be very annoying to have all the pipework removed only to find your next washing machine uses hot water again. Having said that, health and safety is always an overriding concern. So there is the dilemma.

Current advice says that any existing dead leg pipework should be flushed at least every 7 days to remove any growth of bacteria and other micro-organisms.

This would involve leaving the hot water hose connected to the hot tap and every 7 days placing it into a bucket and running the tap until piping hot water flushed through.

This is clearly a highly unsatisfactory situation, and unlikely to be taken up and carried out religiously by many, but it is technically a potential solution.

All the facts that I currently know are here. I also found an article that claims copper pipework restricts and suppresses the growth of biofilm – though it doesn’t say it completely removes it..

..Information also says the legionella bacteria can’t survive above 60 °. But how can we be sure that our hot water is actually 60 ° and even if it is, the hot water won’t reach the water trapped in the dead-leg.

I am still researching this issue, if you have any expert opinion, or any thoughts, please add a comment or contact me, and keep watching this article for updates. My own washing machine’s old hot tap was blanked off.

It has a long run from under my kitchen sink into the garage, which is quite a long dead-leg. However, although I remain concerned I haven’t (so far) done a lot about it. Without any proper authority advising about it, it seems more of a theoretical risk.

My personal compromise is that every month I run the old hot tap into a bucket or garden hose and let hot water run through it for a short while. It’s not perfect, but it at least occasionally flushes the pipes through and at least replaces the dead water.

2: Managing legionella in hot and cold water systems (QUOTE: “Legionella bacteria is commonly found in water. The bacteria multiply where temperatures are between 20-45°C and nutrients are available. The bacteria are dormant below 20°C and do not survive above 60°C.”)

Most of the comments below were added before this article was completely rewritten and refer only to the blanking off cap. They may still be useful as most people are still likely to want to just blank it off.