I still receive emails from people whose washing machine door glass has shattered or “exploded” (as described in my article – Washing machine door glass danger). I’ve included two photo’s recently supplied to me in this article. It’s hard to get a proper perspective on how widespread it is but I’m assuming it’s still relatively rare. But who’s fault is it when the glass shatters?

Manufacturers are blaming users claiming they are probably overloading their washing machines or leaving coins and other objects inside pockets. If this proves to be the case they may have a point. But can manufacturers completely wash their hands of this problem, and is it really caused by user misuse? Some of the door glasses are shattering when not the washing machine is not even running.

Is the broken glass safe or dangerous? If the door glass breaks in a safe manner, with no – or very little – risk of injury, and user “misuse” is to blame such as overloading or leaving coins in pockets, then we have to accept that if we don’t use products properly we can suffer inconvenient breakdowns and associated costs in putting it right.

But if the door glass shatters into dangerously sharp shards, exploding outwards and potentially hitting children & pets who might be in front of it then it might be fair to see it differently.

You would expect that manufacturers have a duty to design against the door glass shattering – even if failure to use as instructed or leaving objects in pockets causes it.

Do manufacturers have a duty in law to protect users from dangerous consequences of not following instructions? And do they have a duty to pre-empt easily predictable user behaviour – particularly if the actions can result in dangerous consequences not easily predictable by users. Eg. who would predict that overloading a washing machine would cause the glass to explode?

There’s no doubt that overloading, and leaving coins in pockets is extremely well known, common, and predictable behaviour, and in my experience door glass did not used to shatter like this in the past.

Maybe the care of duty is only a moral one and not legislated for?

I was recently writing a new safety article about electrical adapters and plug extension sockets, and how easy it is to overload one causing electrical overheating – which could set fire to your house.

I wondered why these extension sockets and adaptors don’t have built in safety devices to protect against overloading and potentially lethal fires. Then it hit me. This is even more serious than the door glass issue, and yet there’s no safety device inside to protect users from misusing them with dangerous consequences.

I’ve also seen where people have left laptops on beds blocking the vents underneath, which caused it to catch fire. Again this is technically misuse with very dangerous consequences but they haven’t been designed anticipating people will place them on soft furnishings which will block the vents, nor apparently to cut out before catching fire. Surely they should be?

Maybe people will have a legitimate claim against these manufacturers for not thinking about these potentially lethal consequences, but maybe not. It’s not really clear. 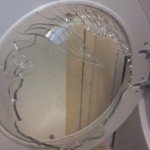 However, people do need to take responsibility for their own actions, but at the same time we all make mistakes and have lapses of judgement so shouldn’t easily predictable mistakes and even misuse be made safe by design?

There are plenty of other examples where people routinely misuse products with dangerous and even fatal consequences yet so many of them don’t have built in safety devices. So this strongly implies there is no legal obligation manufacturers have to protect their customers from themselves when they misuse their products.

Despite the last few paragraphs, manufacturer’s clearly do design safety features into washing machines to protect users from their own stupid actions, which they would never dream of removing. The door lock for example. You cannot open the door whilst the drum is spinning for obvious reasons.

Imagine the outcry and litigation if anyone could just open the door whilst the drum is spinning at full speed. So manufacturers do either have a legal or moral obligation or they wouldn’t always fit a door lock device. They could just tell users in the instruction book not to open the door whilst it’s running. Then if someone does and loses an arm, they can say it’s misuse – their own fault.

So, if “misuse” can cause the door glass to explode out into the kitchen breaking into “sharp shards” I would have thought they would want (or need) to design so it doesn’t happen or at least to mitigate any dangerous consequences.

It may or may not prove to be user misuse, but if they know it is happening, and can see it is potentially dangerous you would hope they would at least warn users about it properly in the instruction book – something like – Warning: overloading, leaving coins and other foreign objects in pockets or washing laundry with metal buckles etc could cause the door glass to shatter.

Is the door glass breaking in a safe controlled way – or in a dangerous way?

See the experiences of consumers who have contacted me, and some of the photos –