If a washing machine measurement states that it is 60cm depth, does this mean that all the piping and electrical wiring at the back will fit under a worktop of 60cm depth, or that it needs just that little bit extra space as well as the 60cm in order to fit?

You can never be totally sure the measurements quoted in the specs would include the space that the hoses take up. If it’s mission critical you should always try to physically inspect and measure at a showroom or at least get confirmation from a sales person.

Normally the measurements of a washing machine’s depth should include the whole area the washing machine will take up including the lid (which may or may not overhang at the back). If the lid overhangs at the back (see photos) then the fill and drain hoses may well fit underneath the lid and not take up much if any extra space. If the lid doesn’t overhang the back of the casing then the hoses are likely to take up extra space and not be included in the quoted measurements. Also don’t forget that the space taken up by a wall socket or the waste water stand pipe if fitted may also stop a washing machine pushing all the way underneath a worktop unless it has a big overhanging lid at the rear.

Watch out for the washing machine sticking out at the front 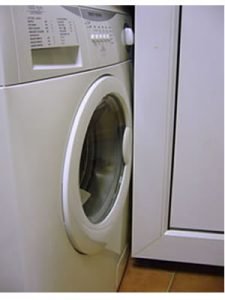 Many washing machines these days have bulky front designs where the front casing bows outwards. Often the door and sometimes control panel, knobs or buttons can also jut out a fair bit. This can cause problems if a door or drawer opens out across the path of the washing machine.

However, that was fine when all washing machines had normal size drums. The emergence of larger capacity drums in washing machines (some as large as 11Kg) has meant many modern washing machines are now much deeper than they used to be. Much of the extra space required for a larger capacity drum comes from making the drum deeper, which is why so many are now 60cm taking up the entire space for a washing machine in many fitted kitchens. If short on depth space it may be possible that some the smaller the drum capacity the less deep the appliance will be although it’s also possible that they may all use the same basic cabinet to save on production costs. 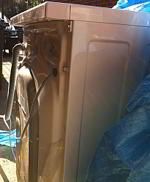 Generally these days many washing machines do have an overhanging lid at the back. The lid may be 60 cmm (600mm) deep but the back casing is often less deep meaning hoses have some room to sit between the back of the casing without extending beyond the space the lid takes up but ultimately if things are that tight you will need to measure it yourself.

These photos show a Miele washing machine and a John Lewis washer dryer, both with overhanging lids that extend further back than the actual casing allowing some room for the hoses to fit within the space taken up by the lid. 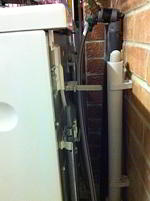 Depth measurements published on web sites and in brochures usually represent the depth of the lid these days. If the appliance doesn’t have an overhanging lid then the depth measurements may not be taking into account the space the hoses take up. Measurements often also don’t tend to include any door, control panel or knob that sticks out at the front