Samsung have had to organise a “home-visit & repair programme” to deal with a potential fire risk in their RS21 and RS60 range fridge freezers. Their own announcement on their web site said that “in very rare cases, there is the potential for internal sparking to occur and in consequence, damage to the appliance.”

However, some press articles used more dramatic phrases (Which have since been removed from their web sites)

As of March 2014 Samsung have extended this safety notice to include ALL RS21 and RS60 fridge freezers no matter when it was made. Initially it was only for models made within a certain date range, this was extended to include more models later and now Which? are reporting it’s all of these models regardless of purchase date plus the models listed below. You may also want to try this telephone number 0800 988 0123 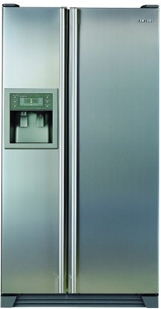 These are the models either affected directly, or as Samsung say, use a similar defrost system so should also be checked –

If you have a Samsung fridge freezer

To be sure if your model is affected you should check the model number (where is the model or serial number on a fridge or freezer?). According to Which? the Electrical safety council have advised anyone with one of these model which hasn’t been modified by Samsung should stop using it immediately and contact Samsung.

Unfortunately all my links to help on the Samsung site have had to be removed. This is because it seems all manufacturers take these pages down as soon as they think they can get away with it. This is understandable to a point but it’s disgraceful.

Only today (Feb 2017) I’ve had an email from a consumer who has one of these affected fridge freezers. She was shocked to find this page whilst researching a different fault – especially as she registered the appliance with Samsung.