Washing machines are heavy. This is mostly due to concrete blocks inside. But if the drum wasn’t weighted down it would bang violently from side to side and try to burst up through the lid during spin. Modern washing machines usually have two drum weights inside. One on top of the drum, and one either underneath or around the front of the drum.

New concept to replace the weights

I’ve just seen an article on the BBC News website about a new idea to replace concrete weights with plastic containers that can be filled with water. The idea involves replacing the concrete weights with empty plastic containers. The weight would be returned to the washing machine by filling them up with water once delivered to the customer. This would make washing machines up to a third lighter during transport. They estimate it could save around 44,625 tonnes of carbon dioxide emissions a year as well as saving millions on fuel.

It sounds like a simple and clever idea. I like the concept. I also love the idea of people thinking of ways to improve things from outside an industry. However, I’m not sure how they will be able to make it work.

Could plastic devices filled with water replace the concrete weights?

According to the article, drum weights in a washing machine typically weigh around 25Kg (just under 4 stone). So getting rid of this weight is genius apart from one major problem – water isn’t as heavy as concrete. The replacement blocks would have to be a fair bit bigger, but washing machines have never been so short of space inside. 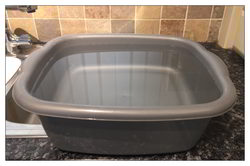 A litre of water weighs 1 Kg. A typical washing machine would need up to 25 litres of water adding to equal the weight of previous concrete blocks. The picture shows my washing up bowl full of water. I measured out 10 Litres of water so it should weigh 10 Kg.

Therefore a washing machine with 25 kg of weights inside would need weights capable of holding the equivalent of two and a half washing up bowls of water. Larger capacity drums have forced manufacturers to increase the size of the outer drum.

It’s already probably too close to the cabinet and other parts. There needs to be adequate room between the outer tub and other parts as well as the sides of the casing and the lid. These drums can bounce and bang around violently on spin and cause damage. They can’t increase the size of the cabinet to accommodate larger weights. So there’s no spare room.

If the savings in carbon dioxide emissions and fuel were overwhelmingly desirable then appliance manufacturers might find a way to make it work. I think major redesigns would be needed. The outer drum could be double skinned to take some of the water. I also think the hollow weights would need to be part of the outer drum’s mould. Attaching plastic boxes to it would be fraught with danger of them coming loose.

It’s only since manufacturers changed to a plastic outer drum that extra weights have been needed. Plastic drums are so much lighter than the old metal parts that they now need multiple weights. Ironically this idea would have been very workable back then because washing machines had plenty of space inside. But the weight savings would be too little to bother with because they only had one weight. 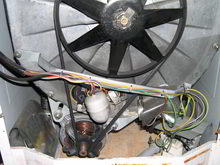 Up until roughly 25 years ago washing machines all had outer drums made of metal. They also had big aluminium back plates (see pic) holding the bearings. These parts weighed a decent amount on their own so they only needed a relatively small tub weight underneath.

Some space is also needed for the polystyrene packaging inside many washing machines. There may be no space left for transit packaging if the extra large plastic weights are fitted.

Washer dryers have even less room 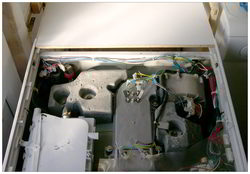 Because of all the extra drying components in a washer dryer there is even less space available.

Is it practical to fill the weights with water at point of delivery?

Even if manufacturers managed to fit the larger blocks inside there is another potential downside. It will complicate installation at the customer’s home. Extra costs will be incurred by customers paying to have one installed. Extra complications and effort will be involved for diy installations.

It will be difficult adding water to plastic weights underneath the drum. It would just be too inaccessible. So the new blocks would have to be fitted around the front of the drum (as well as on the top). They could both then be accessible for adding water with the lid removed. I’d also be concerned about a customer or installer spilling water when filling them. What if water spilled inside onto electrical parts? If not fully filled – could water move around inside causing shifting weight issues?

The devices would need to be leak-proof too. If one leaked it could flood the machine with water causing potential fires, or catastrophic damage. Lots of centrifugal forces are involved during spin trying to shake off drum weights. The current concrete ones are always coming loose and breaking as a result. If one of the water filled weights came loose the plastic could soon wear through and water would leak everywhere – a disaster. The only sensible option would be for any fill-able weights to be part of the drum’s mould and not bolted on.

It’s a clever idea, but unless washing machine manufacturers radically redesign their machines to allow space for larger weights I can’t see them fitting inside. Also the practicalities of filling them up with water when delivered to the customer and potential disastrous water leakage into the machine if they leaked mean I struggle to see how it could be made to work.