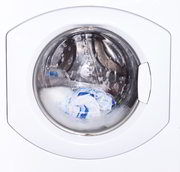 This is one of the most frustrating faults to have. Especially because it rarely jams before you start washing and instead normally waits until your clothes are nice and clean. Then they get trapped inside the drum.

Don’t be tempted to force the door. You’re likely to cause damage and need to spend more money on more parts.

Some washing machines are able to detect when water is inside the drum and lock the door with what’s called a pneumatic door lock. So If there is water stuck inside, or a fault causes the washing machine to think there is, then the door will not open. This could be due to a problem draining the water or with the system responsible for detecting water levels.

However, most modern machines no longer have such a locking system due to cost cutting and / or because lower water levels have made them less necessary. You will see instructions on how to check if your washing machine has a pneumatic lock fitted later in the article.

Does the washing machine still have water inside?

The first thing to check is whether the water is still inside the drum or not. If there is obviously still water inside the machine then this could be the cause of the door not opening. Drain the machine using this guide washing machine won't drain water. If the door opens once you have drained out of the water then use the article to investigate why.

Can’t see any water inside

If you can’t see any water inside, and the washing machine carried out the full spin as normal, then it may be caused by a mechanical fault with the door mechanism. Or possibly a faulty door lock. Various faults that can stop the door from opening are listed below. Plus help on how to open a jammed door.

Most common causes of a jammed door

Many washing machines have some sort of a child lock to prevent them from opening the door. Some could be activated electronically via option buttons or settings. Some are incorporated into the door itself. Before you start getting ideas of complicated faults, just make sure that there isn’t a child lock on the washer that has accidentally been activated. Check in the instruction manual if you are unsure (washing machine instruction manuals).

The door interlock could have just jammed up inside and need replacing. Most modern door locks are not high quality parts. They are very simple, cheaply made devices. However, just replacing the door lock because you think it is probably the reason why the door will not open is a little bit of a gamble.

But if you check everything else in this list, and find nothing there to indicate the cause, then there is a reasonable chance that a new door lock will fix this fault. For a proper understanding on how they work read this article how does washing machine door lock work?.

The door catch, handle, or some part of the door catch mechanism could be broken. This could prevent the mechanisms involved in opening the door from working. It might be difficult to differentiate between a faulty door lock and a problem with the door catch and handle. However if you are aware that it has not been right for some time you might think that something is finally broken. You need to try to open the door to be able to examine all of the parts. Check the section later on describing how to open the door. (buy washing machine door handles, catches & hinges)

On some machines if the pressure switch is still registering water in the drum it can keep the door lock electronically energised. If this is the case, turning off the machine at the mains should allow the door lock to cool down and open after a few minutes. This is a fault likely to persist until fixed. Either the water isn’t being pumped out properly, or a fault on the pressure system is not registering that the water has pumped out when it has (faults on pressure system).

This can only happen if the washing machine has a pneumatic (air operated) door safety lock. If it has there will be a small hose/tube connected to the door interlock. The other end of this tube connects to a pressure chamber bottle on the tub.

The majority of door locks will not have such a hose, but if you have an expensive, or quite old washing machine it’s worth double checking. A blockage in the pressure chamber can trap air in this tube keeping the door locked. Understand how a pneumatic door lock works 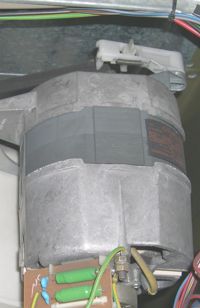 As far as I remember this device was only ever fitted on Hotpoint and some Hoover washing machines in the past. The pecker is so named because when you try to open the door, a cable causes a device to peck down onto the drive belt.

But if the belt is not moving, it will get a firm purchase on the drive belt and allow the mechanism to operate. This mechanism opens the door.

So the point of such devices that it enables the door to be opened at any point as long as the drum is not revolving. However, these systems were prone to the pecker mechanism being bent, damaged, or completely knocked off when the drum went out of balance and banged around violently.

It is very unlikely that any modern washing will have such a device fitted. If you have there will be a cable, similar to the cable that operates the brakes on a bicycle. It will go from the door lock across to the motor and will connect to movable device that physically pecks at the drive belt when operated.

How to open a jammed door

Due to the nature of this fault the door is often completely jammed. It may be impossible to release the door without breaking something. Make sure you have read and understand all of the possible causes before jumping in damaging parts. The most common cause of a jammed door is likely to be a faulty door interlock. Sometimes you can release the door from the inside by manipulating the door interlock, or coaxing the door catch out from it.

But they sometimes just have to be broken away from the machine. If you need to do this make sure you completely disconnect the washing machine from the mains and if necessary break the interlock off from inside the machine. Don’t force the door or you will just break more parts. The door catch should latch behind a plate in the door lock and sometimes you can manipulate or force the door catch off the plate.

For a better understanding of how the door lock works see – How does a washing machine door interlock work?. You may well find it makes a lot more sense to get a professional appliance repair engineer to look at your washing machine – Book appliance engineer

Comments on this topic have been closed. Keep scrolling to read existing comments, which may contain more advice and help.