The door lock on a washing machine is sometimes called a door interlock. Understanding how a door lock works helps in deciding if one is faulty or not. I get a lot of people contacting me saying they fitted a new lock and it didn’t fix it so don’t just assume.

When you shut the door, the latch on the door pushes inside the door lock and activates an electrical part inside which locks the door shut. At the same time, power is passed through the door lock on to the rest of the machine. The actual latching shut of the door is a simple spring-loaded mechanism where the latch just slips into the door catch and the door stays closed. Locking the door is a separate process.

How do washing machines lock the door?

Locking the door so it can’t be opened whilst the washer is running is usually achieved using a bi-metal part inside the door lock. I’ve been repairing washing machines for over 30 years and seen many different types of lock some of which do not use a bi-metal device at all. Some (e.g. some old Hotpoint washing machines) had a more sophisticated system that only locked the door when the motor was running and/or there was water inside. It achieved this using a pneumatic device (discussed in part 2). However, the majority of washing machines just use a bi-metal strip inside the door lock, which is cheap and effective.

How does a bi-metal device work?

Two different types of metal with different properties are combined on top of each other. When the door is closed, a connection inside the lock powers an electrical coil wrapped round the bi metal part. This heats up the metal, which then bends. This bending operates the lock and then makes another electrical connection passing power to the rest of the machine. Once power is turned off, the metal strip cools down after a minute or two and straightens back up again releasing the door.

How the door lock passes power on 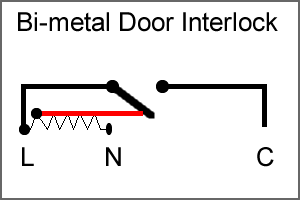 In this rudimentary diagram you can see how the description above looks.

The red line represents the bi-metal strip and the zig zagged lines between the live and neutral are the coil. Power activates the coil, which heats up the bi-metal part, this then physically bends and pushes the switch to the on position (as well as mechanically locking the door shut). Once this has happened (usually a second or so) power can run around to the common wire at the end, and therefore on to the rest of the machine allowing it to start.

Note: Do not assume anything about the wire connections. They may be in totally different positions on different machines. Unless the connections are marked Live Neutral and Common you would need to work it all out with a continuity test meter. If you get the wires the wrong way round you can blow the device. You may even blow the main PCB. It may be possible for a fourth wire on some variants to carry power to an LED which may indicate that the door is closed and the lock activated.

How can you tell if a door lock is faulty?

There isn’t a simple test, although you may be able to get a resistance reading between the live and neutral which should measure the small coil. You might expect to get a resistance reading of something like 1000 Ohm. As with most fault diagnosis it’s mostly a matter of the process of elimination, observation and previous experience. But as my opening paragraph states, if you understand exactly how something works you are much more likely to be able to diagnose why it’s not working.

Faults to look out for

First, the obvious. Are there any connection faults on it? Wires can come loose, or overheat and burn. A lack of power, neutral return, an open circuit coil, or even the door latch not properly activating an otherwise perfectly functioning door lock can all cause faults.

The coil can go open circuit or it can develop mechanical faults preventing its proper operation. Poor connections or burned wires are common. If wires are burned and have gone discoloured or hard they need stripping back to good wire and new connectors fitting. Also replace the lock because it will have overheated connections inside too.
In order to operate, the door lock needs the door catch to click firmly in place. If the door catch has broken, come loose, or the door isn’t closing properly it won’t operate the lock. It’s always worth spraying the inside of the door lock and door catch with WD40, it costs nothing and you never know.

Anomalies to be aware of

After the door lock has been activated and the door locks shut, other faults could stop the washing machine from doing anything. For example, (This is a possibility but much more rare) if the common wire at the back of the door lock has a break in it somewhere or faulty connection where it connects to other parts of the machine so the power passing through the lock cannot reach its intended destination.
The door may well lock, but this only shows that the lock is working. It doesn’t prove that the connection inside the lock is passing power on, nor does it prove that the wire used to pass power on is connected properly

A fault inside the main PCB, or even an open circuit motor or heating element on some washing machines can result (bizarrely) in the door lock activating and locking with displays and lights coming on but washer will not do anything at all. Some Hotpoint and Indesit machines have this anomaly.

The most common type by far is the simple bi metal device described above, usually with three wires (see photo). They differ in size, shape and colour – see Ransom Spares Door locks section so see what they look like (or buy).

The three wires are normally, the main live supply, a neutral return for the coil which heats up the bi metal strip, and the third wire is used to carry the electricity from the door interlock once it’s been activated across to the rest of the machine.

NOTE: Not all door locks are the same. This subject continues on another page where it looks at Different types of door locks

25 thoughts on “How does a washing machine door interlock work?”