What is an aqua stop hose and do you have to use it?

The words aqua, and stop, are used by a variety of companies covering different products. They all try to “stop” damage from leaking water in various situations. So-called “aqua stop” systems in appliances can combine more than one leak detection system including float switch detectors in the base of the appliance.

However, this article deals with questions about the actual aqua stop fill hose supplied with several brands of washing machines and dishwashers (including AEG, Neff, Bosch & Siemens).

How does the Aqua-stop hose work?

It’s a hose within a hose. The outer hose is made of corrugated plastic designed to contain any water if the inner hose leaks. There is also a plastic housing at the end where it connects to the water tap.

If the inner hose ever leaks, then a device inside this housing is able to detect the incident and prevent further water getting into it. If this happens, the hose will no longer let any water through to the appliance and will commonly indicate it has “tripped” via a red dot in a small window in the housing.

If this happens the hose is now useless and cannot be repaired.

Problems associated with the aqua-stop hose

1: Their bulk and relative inflexibility can make them difficult to use depending on the set-up and plumbing

2: They can’t be extended if they are too short. (You can still connect one to a normal hose but that would of course introduce a normal unprotected hose partially defeating the point of using an aqua stop hose)

Forbes specialise in renting Bosch appliances so they know them inside out. They also rent other brands and many other products.

3: The size of the bulky plastic housing at the end connecting to the water tap is especially difficult to accommodate for many people (especially with taps fitted under the sink) where there may not be room for it. So in many situations it can be impossible to connect this hose to existing plumbing

4: Many people’s taps point out horizontally and some of these hoses should only be fitted pointing down as shown in the photo below. Check your instruction manual for fitting instructions) 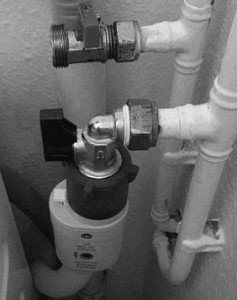 This photo was sent to me by Mark. He had to fit a new cold tap with a 90 degree angle pointing down to accommodate the aqua-stop hose.

His original tap had extended horizontally like the (no longer required) hot tap behind it. Before changing the tap there was no room to connect the new aqua stop hose.

This demonstrates the type of problem many people have when confronted with these larger bulky hoses with specific fitting instructions as described in the main article on the left.

Can you replace an aqua stop hose with a normal fill hose?

Many aqua stop hoses do nothing different except protect against leaks from itself with a mechanical stop mechanism activated by leaking water inside the hose.

You can usually replace them with a normal fill hose if you are prepared to remove this flood protection.

However, some aqua stop hoses actually have an electrical solenoid inside them, with wires running through the hose from the washing machine. In this case the aqua stop hose acts like a remote fill valve which would be missing in a normal hose.

If the washing machine also has a regular fill solenoid with power running to it, and the aqua stop hose just piggy backs of its electrical power being energised when the main valve is energised, then a normal hose should still work OK.

I’ve seen cases where some manufacturers bizarrely threaten to void your guarantee if you don’t use their hose. This makes no sense at all.

The hose protects only against the fill hose bursting or corroding, which is in fact a pretty rare event these days anyway. No one would dispute they have every right to refuse any repairs to the replacement hose you have used instead, and if by any freak chance the split hose sprayed water onto the appliance and caused damage they have no need to fix that either – but it’s not really on to refuse to repair a faulty motor or any other fault on the washing machine unrelated to the fill hose.

Having said that, all guarantees are in addition to our statutory rights, and in law, no one has to provide any guarantee whatsoever. Our rights extend only to the Sale of Goods Act. The only reason they give any guarantee is because everyone does, and it’s an important – nay essential – sales tool. No one is likely to buy any appliance with no guarantee. But as it is an addition they are able to try to impose certain restrictions. If we think the restrictions are unreasonable or restrict our “statutory rights” then we can challenge them, and if necessary seek consumer advice or take them to the small claims court.

It’s hard to imagine a manufacturer seriously trying to convince a customer with a 3 month old washing machine that they must pay £200 or more to have a new motor fitted simply because the washing machine is connected by a normal fill hose instead of their aqua stop hose, how ridiculous.

This article was originally published on Washerhelp.co.uk and had attracted some comments which you may find very useful to read. Therefore the first dozen or so comments under this article are the comments I’ve transferred across.