Reconditioned washing machines were popular in the 70s, 80s and even 90s, but are they still a viable buying option now new budget washing machines are so cheap? Reconditioning is an excellent good idea in these throwaway times, but economics have affected the viability of reconditioning appliances for most engineers.

As new ones continue to get cheaper and much less repairable it’s become more expensive to properly recondition them to a high standard, and much less attractive for customers to buy. For example, you can still currently buy a new budget washing machine for as little as £199. I don’t believe it will much good, especially for a large family, but it is brand new and that’s appealing for most people.

You can get an idea how ridiculously cheap they are now because I used to sell reconditioned Hoover washing machines in the 90s (See pics below) for £199 and as high as £250 when new ones with the same features were around £400+. Things have drastically changed.

Reconditioned washing machines would be a good idea if..

High quality reconditioned washing machines such as Miele would be ideal, they’d last longer and give a far better service than any new budget one.

But the cost of spare parts, and the lack of discarded examples to recondition (because they last so long and there are relatively few sold) mean it’s not viable. I don’t know of anyone reconditioning real high quality washing machines. If they were they’d be a great alternative to cheap budget rubbish.

A properly reconditioned washing machine should be more than a repaired second hand one.

Some might argue that if they repair a broken washing machine, test it, and clean it up then they’ve reconditioned it, but most people’s understanding of reconditioning is to do more than just fix a fault.

It should be to extensively repair and replace parts, often ones still working but showing signs of wear so as to put it into a new condition. Not a “new” condition, but a new state of condition so as to have a renewed life expectancy.

To my knowledge, no one truly reconditions a washing machine like you could in the past. When I used to recondition them in the 80s & 90s I would always fit a new armature and carbon brushes in the motor (making the motor as good as new), fit new drum bearings, door seal, control panel and trims, drain hose, and any other part that was worn such as suspension, pumps etc.

They looked almost new and had a full 12 month guarantee just like a new one. To recondition a modern washing machine like that now would be impossible because it would cost more than you could buy a brand new one for.

Should reconditioned washing machines be avoided?

It’s very difficult these days to find a genuinely reconditioned washing machine that has the chance of a new lease of life.

But then again even a second hand washing machine could still last long enough to be good value for money if you are lucky enough depending on how old it is when purchased. Don’t forget though that the cheapest new washing machines can still be only around £170.

There are some companies who claim to still extensively recondition washing machines, if you find one, and trust that’s exactly what they are doing they may be worth buying if circumstances dictate but the cheap price of new ones and expensive cost of spare parts for repairs make it impossible to do as good a job as we used to do many years back.

Realistically, although you can get lucky and get a decent life out of one, you have to tailor expectations according to prices. I’ve seen “reconditioned” washing machines advertised “from as little as £79”. Even if they got the washing machine for free, and did nothing but clean it up and deliver it to you I can’t see how they can make a proper profit out of £79. Then they have to guarantee it for some period.

Reconditioned washing machines from the past

I’ve been prompted to seek out my old photos of the reconditioned washing machines we used to do back in 1990 as described in my article above. We spent a lot of time and money on them and made them look virtually brand new. 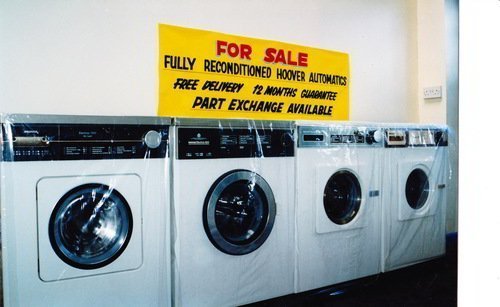 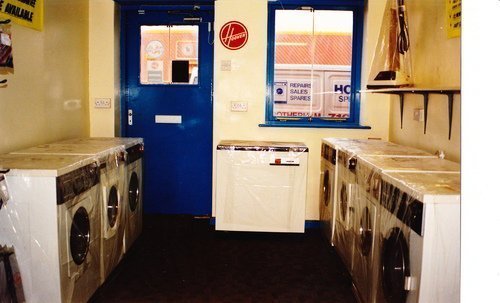 Today it would be impossible to recondition washing machines to anywhere near this standard. They would have to be sold at higher prices than brand new ones to make any profit.

Mitsubishi have produced “the world’s quickest washing machine” (currently only available in Japan). Most people…

4 thoughts on “Are Reconditioned Washing Machines Any Good?”