If your washing machine or dishwasher is connected to the wrong water drainage system it is misconnected and you are contributing to damaging the local environment. Harmful chemicals in detergents and other waste products can pollute local rivers and streams.

The water being pumped out of these appliances can also contribute to flash flooding by overloading the rainwater drainage system. Is yours? Read this article to find out more.

If someone connects any part of our plumbing incorrectly we could be part of an environmental problem. It’s also illegal. You may be completely unaware of plumbing “misconnections” unless you check (there are instructions on how to check later).

It could have happened before you moved in but it’s the current householder who is responsible for putting the plumbing right. It shouldn’t be too difficult to put right in most cases.

Here’s how a misconnection can happen

There are two distinctly different drainage systems available to most households.

One is for waste water from toilets, sinks, washing machines and dishwashers to discharge into. This water ultimately gets treated.

The other is situated at the bottom of the fall pipes from our guttering for rainwater. This water runs untreated into rivers.

They have different jobs, they are totally separate systems, and must not be mixed up.

Unfortunately, many thousands of houses do have these systems mixed up. This is called a misconnection.

Why does it matter?

Your washing machine or dishwasher could be pumping waste water containing harmful chemicals into local rivers. Or it could be contributing to overloading the storm drains in heavy rain making flash flooding more likely.

I myself have been a victim of this. This article describes my experience, which should be helpful in showing you exactly what to avoid – or how check your existing connections.

I moved into a new house and connected my washing machine up to the existing plumbing which was in the garage.

The previous occupier had installed a washing machine in the garage to leave space for a dishwasher in the kitchen, but had misconnected it to the storm drains instead of the sewerage system for waste water. See below for details and photos.

The following 2 pictures show my garage with brown-coloured guttering and fall pipes round the back. 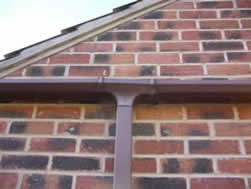 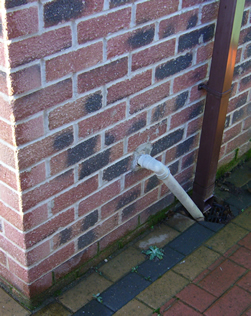 At the bottom of the fall pipe is a grate. Rainwater from the garage roof’s guttering runs into this grate and goes into the storm drain. This harmless rainwater joins the surface water drainage system under our roads and runs untreated directly into local rivers and streams.

Unfortunately, you can also see a grey pipe to the left. This is the waste water pipe that the washing machine pumps out into.

This washing machine is misconnected! Its waste water full of harmful chemicals and bleaching agents is being pumped into the storm drain designed only for rainwater. It is ending up in a local river. This needs correcting.

Out-buildings and garages aren’t normally connected to the sewerage system. This means most people installing a washing machine are likely to misconnect the waste water pipe to the storm drain instead – which is illegal.

How to make sure you have no misconnections

1: Look at the large 4 inch stack pipe on the outside of your home where the toilet is connected (see photo below).

2: No fall pipe from the guttering should be connected to it. If it is, heavy rain will overload the sewerage system.

3: Look at the guttering and fall pipes on your house and other out buildings.

4: No other pipes from sinks or appliances should connect to this system. Only rainwater should run into it.

5: At the bottom of the guttering fall pipe there may be an open grate. Only rainwater from the roof should run into this grate or be connected to this fall pipe. No plumbing from an appliance or sink should be connected in such a way that it runs into this pipe or grate.

This picture (Pic 3) shows a 4 inch main waste water pipe which is typically found at some point on a house. The waste water pipes from the bathroom, kitchen and appliances such as washing machines and dishwashers should all be connected to this pipe or pump out into a grate next to it.

This photo (Pic 4) shows a sink waste pipe running into a grate which is right next to the main 4 inch water water pipe. The dishwasher in the kitchen also pumps out through this pipe. This connection should be OK as the grate is connected to the sewerage system underground.

On pic 5 you can see that the lone pipe on the side of the house runs round the corner and connects to the main 4 inch pipe. This is correct. The lone pipe actually passes underneath the fall pipe for the guttering. Someone could potentially have taken the easy option and connected the lone pipe to the fall pipe at the corner. This would have resulted in soap, dirty water, shampoo and other undesirable liquids draining into the local river or stream.

I have more information on plumbing misconnections including official diagrams, a video and other photos of good and bad real life cases.