Keep children away from detergent capsules

I first wrote about the potential dangers of liquid detergent capsules and tabs in 2009 after I saw in the news that a baby was “badly burned” by a washing machine detergent when gel from a liquid capsule had been trapped (partially undissolved) inside a vest.

The vest was then unfortunately put onto the child without the gel being seen. Since then it’s emerged there are more dangers associated with detergent capsules.

Thousands of children (commonly aged under 5) are finding the brightly coloured capsules very attractive and being hospitalised.

Some are either popping them open by pressing down onto the soft bubble filled with gel causing burns to the eyes, or biting into them causing severe internal burns when some of the liquid is swallowed.

There have been tens of thousands of incidents, at least one reported death, and many hundreds of hospitalisations world-wide. Fortunately most children have recovered but this is a very real danger.

BBC news reported back in 2012 that 5 children in Glasgow in that year alone had been admitted to hospital with serious chemical burns after either swallowing or biting into a liquid gel detergent tab.

The children suffered burns (some described as life threatening) to the inside of the throat or the eyes and an 8-month-old baby girl spent 4 days in intensive care after biting into one.

Don’t underestimate just how attractive these capsules are with their vibrant colours and lovely soft bubble-wrap type packaging that’s pleasant to hold and manipulate.

Most parents are completely unaware of the dangers these products pose, and with a busy day-to-day routine often keep them under the kitchen sink, or close to the washing machine or dishwasher for convenience. 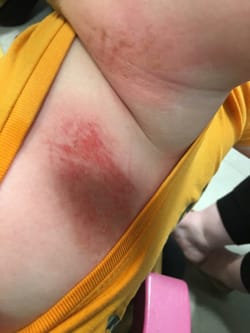 This picture (pic 2) was presented in my Facebook newsfeed. It was shared by one of my Facebook friends. I asked my friend if she would contact the original poster and ask my permission to publish it, which she agreed to do to help others. This is what the mother wrote –

Warning: This is what happened to my little boys skin after bursting laundry pods. They were out of sight, however, my son has special needs and climbed up to get them. The contents of the detergent pods were only on his skin for a very short time before I showered him but the damage was already done. Please, if you have children be so careful with these products. My child has got 2nd degree chemical burns that will require weeks of treatment and he has had to be given morphine for the pain!  ”

Another danger to be aware of is related to overloading your washing machine. This can trap these capsules inside the laundry folds. This in turn can cause the pods to only partially dissolve leaving undiluted detergent gel on or inside laundry.

Take care, particularly when washing children’s items. You should make sure the washing machine is not overloaded to such an extent that the whole mass of laundry just turns round in one big lump and then put one of these capsules inside with them.

In such situations the detergent has no room to dissolve properly. As we’ve established, undissolved detergents can burn and could have serious consequences. Instructions on the packet should also be read and understood properly. It’s too easy to assume we don’t need to look at instructions for commonly used products but we should.