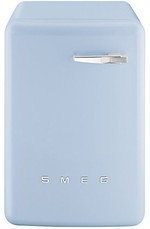 I’m always open to novelties, and this washing machine is definitely novel. Not only does it have the 1950s retro style, but it’s disguised as a fridge. How someone came up with that idea and got it made I don’t know, but see the photo – it’s a fridge! You would never know that it’s really a 7Kg washing machine.

We all know that novelties often disappoint. If something is good it shouldn’t need gimmicks. However there’s always room for a bit of fun. Disguising a washing machine as a fridge is clearly going to cost a lot of money and have a niche fan base, so I have to wonder what the point is. I’d guess it has to be that if you have plenty of money and like the idea then why not? It would be fun having friends around and telling them to help themselves to a cold beer (once). However, it needs to be a good washing machine underneath otherwise it’s an expensive novelty to show off to friends, which few can afford. Current prices are around £800.

What about practicalities of use?

Having a fridge door at the front has a few consequences. Firstly it covers the washing machine up, which is great when not in use but. However, it’s desirable to be able to see the washing machine when it is running (especially the control display).

On the plus side there’s a handy storage compartment inside the fake door similar to inside a fridge door. It’s very thin though so unlikely to be that much use. I would also expect the extra door to make the washing machine quieter, but according to some reviews it’s, “noisy” on spin.

I like the look, I like the crazy concept even, but it doesn’t appear to be a great washing machine, especially when you can buy a Miele for less. Plus it’s too tall to fit underneath a worktop as well as needing at least 10 cm space on the left to facilitate opening the “fridge” door, so it needs to be free standing. It’s also available in black, blue, cream and pink.

Frankly, you can buy the best washing machine available for less money (Miele) so if you have that kind of money to spend you’d be seriously better off with a A 7Kg Miele. If on the other hand you have the money to buy a novel washing machine and don’t care as long as it washes and spins then go for it.

Check out hundreds of reviews

If you take out a trial offer for Which? you can see what they think of this model as they’ve reviewed it. Also get an impressive list of benefits including access to hundreds of reviews – check out my affiliate Which? page –Why subscribe to Which – what’s the catch?