You are here: Home / Buying Appliances / Buying Advice & Tips / Do we really need to dump our old inefficient appliances?

There’s been a big campaign trying to persuade us to throw away our old inefficient appliances and buy new – more efficient ones. They claim we will be helping save the earth, and will save ourselves lots of money too.

I agree that new appliances are usually more efficient, sometimes significantly so. I have more difficulty though in accepting that it makes sense to throw away a perfectly good white goods appliance if it is working okay in order to save either money or save the environment.

As far as I can see, one of the big problems the environment has is that we are constantly throwing away products when there is nothing wrong with them. This creates big disposal problems and perpetuates the mass production of more and more products, which by design will not last very long.

Emotive language Here are some quotes from one campaign.

Our old fridges, freezers and washing machines are costing us the earth.”

“The Time to Change programme aims to promote energy efficiency in UK households by encouraging the replacement of the estimated 15.4 million outdated domestic appliances still in use in UK homes   ”

But if my fridge or washing machine is working perfectly okay, won’t it damage the environment more to throw it away than to keep using it? I am basing this thought on the fact that someone will have to drive to my house to deliver a new appliance and take away the old one, then have it taken to a recycling centre. Then the old appliance has got to be scrapped and dealt with in an environmentally friendly way. The harmful gas has to be removed from refrigeration appliances, and lots of energy used to melt down metal, recycle plastic or even ship off parts to other countries or landfill.

Then there’s the packaging on the new appliance. Lots of packaging that will need another trip to the dump and more recycling required. Let’s not forget all the energy, resources and fuel used up in making the new appliance in the first place. All in all I would have thought the environment would be much better off if millions of people did not throw away their old appliance if it is working to their satisfaction. 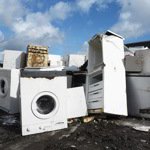 Having said all the above, the web site promoting the drive to dump old appliances do claim this is a myth. They say, “recent studies of the total environmental impact of appliances (taking into consideration the manufacture and energy consumption during lifespan and disposal) have shown that the main impact occurs during the use of the product. Production has a very low carbon cost and on disposal at least 80% of the material is recyclable. The benefit of running an energy efficient model outweighs other environmental impacts within a few years.”

But I’m not sure this is a balanced assessment of the situation. I find it hard to believe that it is better to create and deliver a new appliance (usually from a foreign country) and then dispose of the old one and its packaging than to just let the old one run a few more years until naturally reaching the end of its life just because it costs a bit more to run over a year.

It’s not good enough to just go on a gut feeling so let’s look at the facts and figures.

What are the savings available if you replace an old washing machine?

Let’s look at figures as supplied by the campaign’s Time to change energy calculator and find out what savings I can make if I have a 10 year old washing machine that’s working fine and has served me well, and I scrap it and buy a new one.
Selecting “washing machine” and then “made in 1998” I get the following estimate –

“Replacing your Washing Machine manufactured in 1998 with a new high efficiency model, on average, you could save:”

Energy saved kWh/year = 44
Percentage energy saved = 17%
The equivalent of leaving a light bulb on, day and night, for 30 days

“17% saving” sounds a lot more impressive than £4.81. This shows that all percentages quoted are always useless and often very misleading without some proper context. Even if the price of something increases by 100% it’s not necessarily a substantial increase if the original cost is only say 1 pence. Likewise a saving of even 50% is not worth getting giddy about if it’s only 50% of a very small amount and particularly if you have to spend hundreds of pounds to achieve it.

At the end of the day the amount of money in reduced energy costs you can save by dumping a perfectly working washing machine is very small. Although even small savings are welcome and will mount up over the years, investing hundreds of pounds up front to save several pounds per year looks like bad economics to me unless you needed to replace your appliance anyway. You will never get that money back in energy savings so scrapping a washing machine just “to save money on energy usage” is bad economics.

* Here’s how I worked out my electricity charge figures. I pay 17.37 pence for the first few hundred units used and then “secondary units” are charged at 9.72 pence each. Rather than assume the washing machine will only use the cheaper secondary units I decided to lump them together and worked out what the average cost of a unit is which came out at 10.93 pence. Note that energy prices will be different (and most probably higher) today.

Frankly, I have less confidence talking about CO2 emissions than energy costs. But according to the calculator, a new washing machine will use 23 kg of CO2 less than a 10-year-old one each year. However, they do not tell you how much CO2 will be used in making the new washing machine, transporting it to the shops, your visit to the shop, transporting it to you, removing and a re-cycling your old appliance, getting rid of all the polystyrene packaging and so on. I suspect that the only figures being quoted are the savings in CO2 for the new appliance but in order to make a properly balanced decision we need to weigh that up against the CO2 being used scrapping a perfectly usable washing machine.

This last saving section takes some thinking about because unlike the first two items it doesn’t say, “per year”. It just says the savings in water by buying a new washing machine are 18%. Doing the maths on the kettle filling analogy the overall savings are 3,014 litres of water.

As far as I can work out (using Uswitch – how much water do you use? ) it seems 1 litre of water currently costs just under 0.0002 pence (or roughly 2 pence per 10 litres). On this calculation saving 3,014
litres of water a year will save around £6.03. If my figures are right it’s another underwhelming saving bearing in mind you many need to spend hundreds of pounds to buy a new washing machine.

Who is advising about all this – who are AMDEA anyway?

AMDEA are the Association of Manufacturers of Domestic Appliances. Unfortunately the people advising us to throw away our old appliances and buy a new one are the people representing the manufacturers who make them.

Where do most of the figures quoted in the campaign come from?

Well some came from the European Committee of Domestic Equipment Manufacturers (CECED) and of course the campaign is being promoted through AMDEA which immediately causes suspicion. Other information comes from the Energy Savings Trust and Energy Watch, which restores some credibility but I don’t know where the whole concept came from. If it’s from the associations protecting the interests of manufacturers of new white goods could they have convinced the others that it was a good idea?

“It is widely accepted that 90% of the environmental impact caused by major domestic appliances is a result of the energy consumed during use.”

This sounds convincing but by their own figures they say if I scrap my perfectly good working washing machine made in 1998 for a new high efficiency model, on average, I could (only) save 44kWh – currently £4.81 a year. Even being generous and doubling this energy saving it’s only £9.62 a year. So how can me using an extra £9.62 in a year be so bad that I need to spend around £350 to buy a new one?

If you multiply the figures though..

The Time to change campaign aims to remove 11.7 million outdated, energy inefficient fridges and freezers in UK homes that are ten or more years old which are needlessly wasting £900 million worth of electricity a year.

The Time to change campaign aims to remove 188 million old out dated, energy-hungry appliances across Europe

If you look at the big picture, there’s a lot of energy to be saved and governments have been set targets by Europe and Brussels. A sceptic could say that these targets can be met but at the expense of millions of individuals having to buy new appliances. On the one hand if the target was achieved the UK could save £900 million worth of electricity but millions of people need to spend around £350 each to do it. Have I become too sceptical? Gone too far? What do you think? How much money will manufacturers make if they persuade 188 million people to buy new appliances across Europe?

You can support this free resource by using my affiliates. They provide quality, related services and goods.

If you use Which? properly it can save you more than it costs! It does for me.

If you've found my site useful you can support it by using my carefully chosen and relevant ads when you need to buy, and sharing my pages. Thank you.